So Many Advantages To Being A Cat 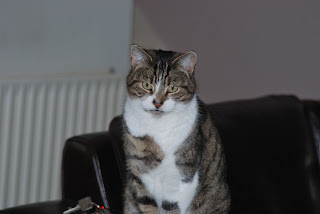 OMG I've just been so worried. The daddies have just given River a haircut.

I was just resting on the table when I heard the daddies talking, it was time to give River hair a cut. They said that they needed to do it as she could hardly see out of her eyes.

I've never seen a haircut before so decided to go near and have a look. OMG it looked an awful experience to have to go through. First of all they sat her down on Disappears lap and Stay had a pair of small scissors in his hand and tried to cut bits away from her eyes and nose. The poor little thing hated it and struggled. Then they changed positions and Disappears tried to snip away. No luck there. 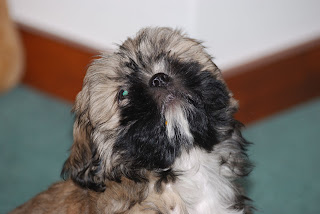 Then they changed positions again and tried to bribe her with some treats. She was still struggling although wasn't making much of a noise.

I hated seeing her like this and got closer and closer. I must have looked really worried as Stay came over and gave me a stroke and told me it was OK they weren't going to hurt her.

They then discarded the scissors route and picked up the buzzer thing. They were now trying to distract her by singing and Stay put the blunt end on River so that she could get a little massage from the buzzer thing and not be scared of it. She didn't seem to mind that and Stay managed to get rid of the hair in her eyes. They took it in turns to shave her bum. How undignified but she didn't mind that bit at all and licked their faces.

I'm so glad I don't have to go through that malarkey myself. There's so many advantages to being a cat.

Cats and Dogs - The Other Side