A Mysterious Package Has Arrived 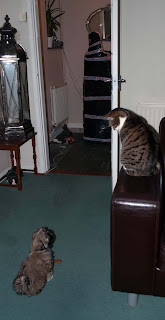 There was a knock on the door just now. This is itself isn't that uncommon, there's always lots of people that daddy ends up speaking to that come a-calling..

There's the lady that delivers stuff in her white car. He must always be expecting someone to follow her because he always shouts out next.

The postman of course although he doesn't always knock sometimes he just puts stuff through the letter box and if he's downstairs they wave at each other.

An assortment of people trying to sell him stuff, or as daddy calls them con artists trying to sell you stuff you don't want or need and the lady and the man who are witnesses to something.

This time however it was someone I didn't recognise. He came in a bright coloured van and a big mysterious package has appeared in the hallway.

The noise of daddy bringing it in disturbed us both and we went to investigate. It's all wrapped up very tight. Daddy said to me it was a Dalek being delivered but I don't believe him, to me it looks more like a mountain.

River didn't give a guess she just looked at it and barked twice before she ran off to play with her tale. Hmm I wonder what it can be?