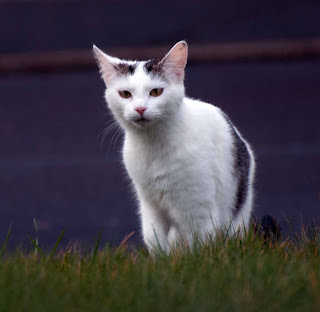 Daddies up and it's all action, a massive Spring clean is going on, windows open, hover at the ready and.... clean!

Yes well when things like this happen I've learnt it's best to be out the way. As the window was open I decided I'd have a rare venture out the front, I never go far, not more than a meter from the front window and as I was out there the lighter Naughty twin popped by.

I asked her how her buried treasures hunting was going on and she said that she was doing exactly that now but so far she'd not discovered anything of interest that could possible be classed as treasures. I asked after her new kittens and she looked at me blankly like she'd forgotten she'd even had any.

They're OK Bella and Sarah are looking after them she told me. Well it's a bit of luck someone is you'd hardly know it the amount of time she's not indoors. I asked if she'd seen anyone else around this morning and she told me Mogsie was about somewhere helping her search as she said he also thinks there's still something to be stumbled upon and with that she was off, barely a goodbye. Still it was good to catch up. 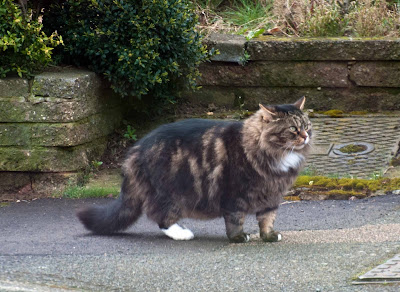