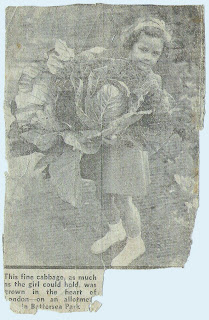 Nanny was born on April 1st a long time ago. Next year daddy says should would have been 80. Wow. Anyway her hatred of April Fools Day came from it happening to coincide with her birthday.

As a young child in London at the outbreak of the war things were sparse. The gifts she received from other children on her birthday seems largely to have consisted of lumps of coal. Even though she knew what was coming she went through with the rigmarole of unwrapping a lump of coal and politely smiling along. The joke wore very thin. They were lucky she learnt early on to hold her tongue for she was a formidable force when reserves called upon. It was a survival instinct type of thing like breathing. Her mother was a force of nature with a tongue of ice and a permanent cigarette in her hand. Her father was a gentle man, an avid vegetable grower and a VERY patient man!

Come to think of it she wasn't too chuffed about Christmas either. Half way through one war time family Christmas lunch her Aunt Ivy, her mothers sister, asked if she was enjoying Snowy, her pet rabbit.
at 11:44