The Mysterious Phoebe and Flo 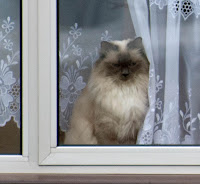 I got expelled from the office again! I just couldn't help myself I really wanted a cuddle from daddy even if he is working, it's like a drug I just can't help myself even though I know what will probably happen.

I was downstairs to sit on the table and watch what River was up to when I heard a sound from the outside, someone was trying to get in. 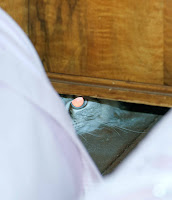 I then heard a call out;

About a minute later I saw a set of keys flying out of the office window and the front door open.

Twizzle must have heard all the hullabaloo as she was watching everything going on from her window looking very surprised. Then all a sudden the girl came bursting in to the living room with two great big pink handbags, inside there were two other cats!

Oh no I thought here we go again the daddies have sprung another surprise house mate on me but it was OK daddy said it was Phobe and Flo and they were coming to visit for the day. Phew that's a relief I don't think I could cope sharing the daddies with other cats on a long term basis, we cats can be a bit demanding you now.

Still I was very curious and crept upstairs to get a peak. Ah so these are the mysterious Phoebe and Flo camped out in our bedroom. Still at least it's kept River quiet and occupied maybe Nadia now can come out of the hallways where she's been camped out since she woke up trying to avoid River who keeps on trying to lick her, now she's been distracted! 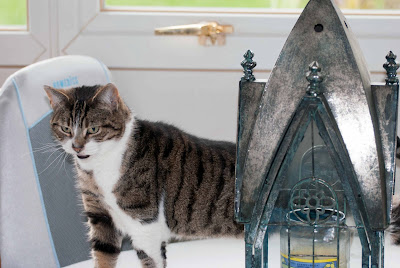 Cats and Dogs - The Other Side
www.riverssong.net/2013/04/my-friends-have-come-to-play.html