I Waited With Anticipation 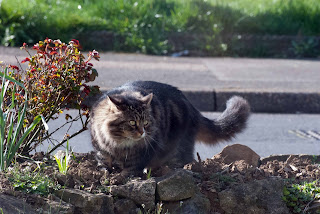 All this nonsense over the buried treasures is beginning to get on my wick and I really am thinking I don't want to be dragged into it any more I've got my own treasures mystery to solve.

I've been hoping that Sarah or George would come over so I can talk to them about it and try and get some piece and perspective going but George has not been seen for days and although Sarah is no longer avoiding me she seems very pre-occupied. 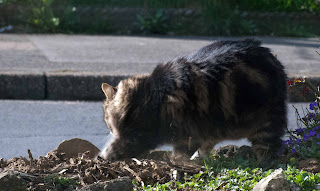 I did think I could speak to Mogsie about it but he's just acting weird around me so when I saw him striding over here just now I thought a breakthrough was coming. 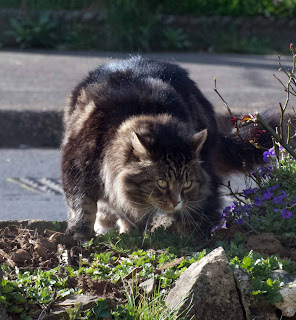 I spotted him as he began to walk across the road, the sun is very bright this morning and his fur was glistening. I know I shouldn't be having these kind of thoughts as I've been hanging out with George but as I say I've not seen him for days. Mogsie was looking in this direction so I knew he was coming over here so I waited in anticipation but he stopped at the rockery. 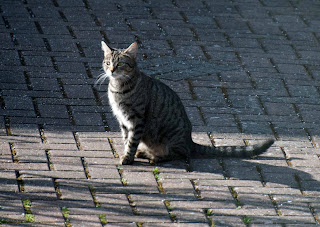 OK, I thought, maybe he's just composing himself but then he looked left, looked right and then started digging away. Hwasn't coming over to talk to me. That has made me think again about my feelings about George and Mogsie, I'm just so confused.

He's digging up our rockery to see if that's where the lighter Naughty Twin has hidden the box of treasures! I expected more from him and I must admit and I did feel a little pang of disappointment that he

As I gazed out looking away from him I spotted Sarah in the other side of the road watching his every move. No treasures are worth this level of stress, paranoia and mistrust, mind you saying that I wouldn't say no if daddy won the lottery.
at 09:44