Memories - Good Luck With That

The daddies have just gone and got themselves all excited watching TV something to do with that JR bloke again, they were making such a hullabaloo that they woke me up so I decided to come down and join them.

As soon as I arrived in the living room I saw something that instantly took me back five years and brought a tear to my eye about my little boy Charlie. 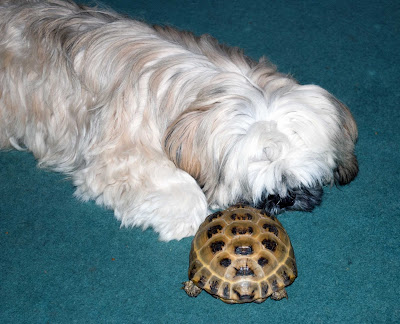 There sitting in the middle of the floor was River laying right next to Nadia who has managed to escape the enforced confinment of the hallway. My little Charlie used to do just that each night lay down and fall asleep next to Nadia, they really were great friends, funny as we've never really bothered much with each other but he was obsessed with her and very protective. I do miss him.

Meanwhile the daddies are trying to get River used to being around Nadia without her trying to lick her to pieces and to stop her from scratching her shell to get her to move.

Yeah good luck with that it's taken near enough six months of constant telling her just to get her to leave me alone. 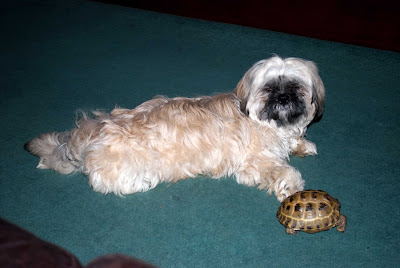 Cats and Dogs - The Other Side
www.riverssong.net/2013/04/lots-of-little-kisses.html