He Whispered Something In His Ear 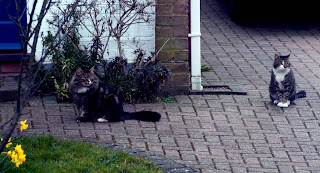 Something's going on between Mogsie and Spit.

After our earlier little exchange of smiles Mogsie bedded himself down for a bit of a sleep. He must have been there about 20 minutes or so before Spit appeared from nowhere. The presence of another cat obviously disturbed him as he sat up and after a couple of minutes with them just sitting by each other Mogsie walked slowly over to Spit and whispered something in his ear. Spit then took a bit of a step back from him.

They then sat there again for what was maybe a minute or so just looking at each other before Mogsie moved closer to Spit again and said spoke again. No reactions seemed to be coming from either of them until M opened the door and then all of a sudden they had a little spat which M broke up.

I'd love to know what Mogsie said to him, shame no one else was around to have an earwig. 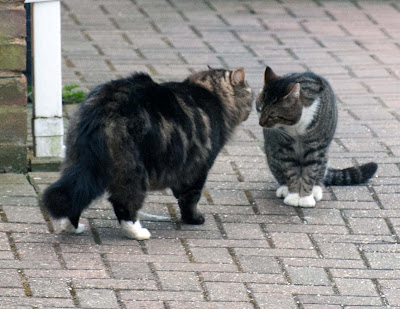