I Gathered Up My Courage...

I moved closer to have a better look, the sounds of cats behind me called softly but did not come any nearer. I was nervous I admitted to myself but something inside me said that I wasn't in immediate peril.

Moving closer and closer until I was almost upon it, a break in the clouds of the day allowed the sun to shine ever brighter reflecting off it's metallic light shell. His scales shone bright and bright the brightest red I'd ever seen.

What was it? I'd never come across a dragon before. I'd heard tales that they were magical in their origins, this indeed was a fine discovery, a treasure beyond all expectations. 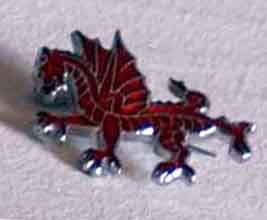 My nose came to within a whiskers width of it and still it remained still. I looked behind me I could sense cats around but couldn't see them, where they were I did not know. This thing in front of me began to shine hot with the sun beating down on it. It was tiny and vulnerable I didn't think that leaving it out here for all sort of predators was the best thing so I gently moved it over towards some nearby bushes with the softest of paw taps.

Once it was hidden from sight I felt a bit more relieved, I turned again and still no sight of the cats that were calling out previously and off I moved, my heart still pounding but pleased with myself that my courage held out.