I'm Not A Mind Reader 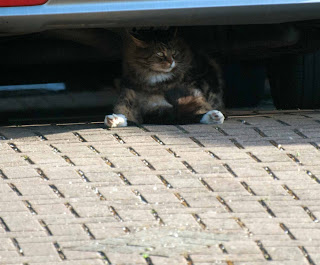 He did it, he came over!

Mogisie was enjoying himself under R's car having a little clean and yoga exercise when I spotted him. He saw me looking back at him and after about a minutes of us just looking at each other he got up and strode over in this direction.

Adrenaline started to move through me, all this Mogsie staring me out over the past few days was one thing but now we were about to come face to face it was an entirely different matter. He came right up to the window sat down and just stared at me. 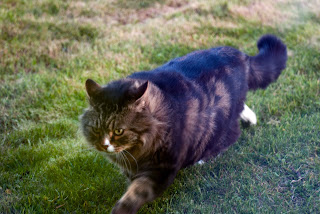 I stared back waiting for him to say something but nothing was coming, eventually I broke the silence; 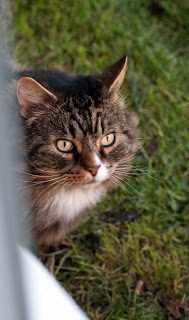 But nothing else we just sat there looking at each other. What on earth did he want to say?

Stay daddy says in situations like these that it's a good idea to stay quiet and wait for the person who has something on their mind to start, if you try and help them by pre-empting what you think that are going to say it can often put things off course so schtum I remained and schtum he remained.

The silence was painful, as much as I've got my catty powers they really only work on myself, I'm not a mind reader. Eventually he slowly made a move as if to say something but stopped himself, stood up, nodded and walked around the back of C's. I remain confused as to what he wanted to say but it's obviously plaguing his mind.