What an afternoon it's been. I managed to slip by River as she was barking at someone walking outside, perfect opportunity so I took it.

George was waiting out back and we moved up to the Peace Garden to have a little talk. Just as we were settling down there was a great hullabaloo coming from out the front so we both ran out there to see what was going on.

We both looked at each other with a look of wonderment, these humans sometimes are weird even I know you can't dig a hole in the back of a van but they tried. 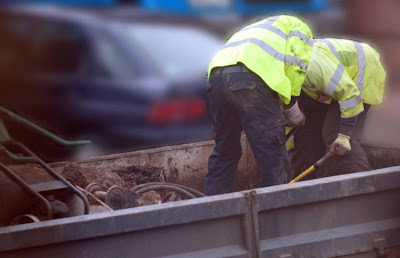 We weren't the only ones out there looking across the road under R's car was Sarah. I asked George how she was and he said that she was OK but a little reserved at the moment. He didn't think that there was any problem between the two of us.

I smiled over at her and she smiled back but she didn't make any move as if to come over and join us and I never venture over that side of the road so we left it at that. 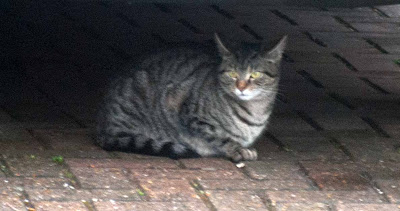 After a little while George bade his farewells he was tired and wanted to go and have a little sleep on the sunshine shed. I stayed out the front, some of the flowers are beginning to come out and I thought I'd sit there having a little sniff of them and watching the men still trying to dig a hole in the back of their van. It was then that I saw Doublay.

I'd not seen him for ages and have never really had that much to do with him so I sat and watched him seemingly trying to let some air out of a tire of a car over the road. I don't think he was too successful and something happened while he was doing it as he jumped right back after going in really close and then ran off very quickly.

It's been an eventful afternoon. 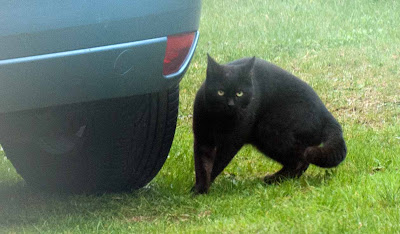