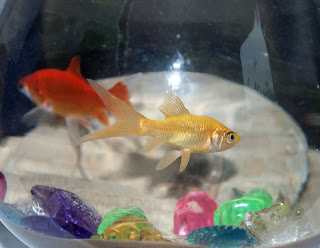 Ah so that's what the great big bowl of water was for that daddy got a while ago. It's underwater world for our two new house mates Alo and Ha.

Daddy came rushing back in this afternoon with a big plastic bag with them in it. I was so curious watching what he was up to. First of all he put the whole bag in the water for a while and while it bobbed around he sat me down to tell me all about them before letting them out into their new world. 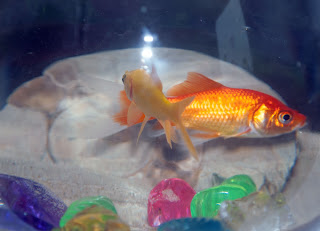 He said that they were joining our family and that as tempted as I was to eat them I mustn't.

Tempted to eat them what does he think I am cannonball? Of course I wouldn't eat them. They may be fish but they are certainly not taste bud ticklers to me.

Strange names but hey they are fish and I don't know what a normal name for a fish would be. He told me that when I walk by them and if I wanted to greet them I should say Aloha.

Again I thought that's a bit mad wouldn't I just say hello? Which when you think about it is almost Aloha backwards Ha Alo. He then explained that Aloha is a Hawaiian word and means peace and love and in Hawaii is also used as hello.