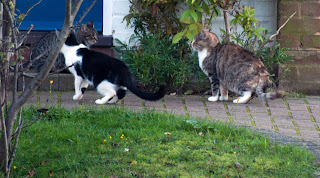 There some pretty weird goings on happening in Catworld this morning.

First of all I couldn't got out my window in the back door as it had frozen shut and daddy had to push it with all his might to get it open before he went out with Disappears daddy. 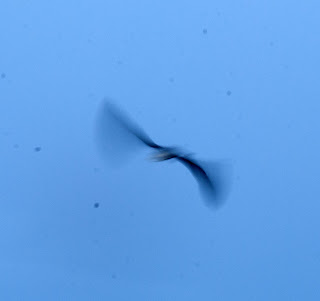 Then as he was returning and opened the door to come in I could hear the crow calling out to bird land, gathering everyone together. Always a sign that something is not right.

Emma, Sarah and the darker Naughty Twin are dancing around M's door earlier than normal for breakfast, like three strands of a little girls plait.

Mogsie actually attempted to jump up at a Wood Pigeon that landed on his roof even though it's at least 100 times taller than he is. I know he's a mighty powerful cat but even he couldn't think he could jump that high surely.

Then one of the Gooses From The Lake stopped on one of the roofs over the road for a little rest, something that I've never seen before. I'm wondering if he was picking up part of the Crows message to take to the rest of bird land.

I shall be on my guard today, something is in the air and that something doesn't smell right my catty powers are telling me so.