News has arrived by carrier Pigeon, well by the Wood Pigeons. 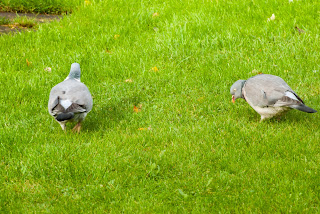 Two of them dropped by to have a little look at the aftermath of the Waterfall of God and I called out to them. I must admit they were cautious and didn't want me to go anywhere near them but I called out from the back door and asked if there was any news on Foxy Lectars vandalism over the road.

They said that they had heard a kerfuffle just at day break this morning and had flown over to see what all the noise was about. Outrage he had not only dug lots of holes everywhere but he'd also tried to attack one of the Sparrow Sisters. Luckily she had got away before he's managed to wound her.

It's good news that she managed to escape from harm but bad news that he thinks he can come and disturb the peace in Catworld and The Land of Birds.

Apparently they've sent word out to everyone to be aware. Squirrel Tree has been informed as well. I'm trying to think if there's anyone else that we need to let know? I know us cat's are all informed or will be shortly by appropriate housemates and The Land of Birds communication network is even better than that of us cats.

We may not always get along all the time but us communities always come together when there is a crisis and it seems we are in the midst of one now. Luckily no sighting of Silver Eyes so we only have the one fox to look out for. Oh what shall we do?