Curiosity After The Storm

Wow that was some downpour last night. It was drizzling during the evening but nothing new really for this time of year and then after we all went to bed it began.

Gales and pouring rain, it woke me up half way through the night and I sat on the window ledge for a while just watching it all come down. It wasn't until it was daylight that I could see properly how much water had come down everywhere. It was like a mini river going down the road.

I'm not as brave as the lighter Naughty Twin who was out and about in it as soon as the rain stopped. I wonder why he doesn't mind the water so much? Well certainly he doesn't mind it as much as I do, I just avoid it.

There he is out and about exploring as soon as the chance presents itself, finding shelter wherever he can. Ah the curious minds of the young. 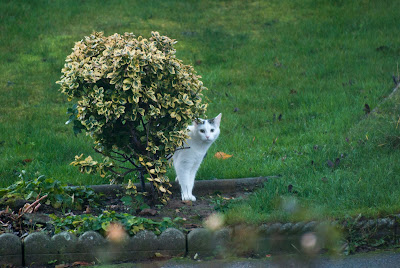