The Day That River Came

Now I understand why yesterday was Lil's Day. It was to prepare me for today.

Disappears daddy didn't get up to go away today. It was a little unusual for a Thursday for him to be home but he does sometimes remain home during the week. The thing is they both got up really early. Stay daddy does all the time anyway and don't I know it. But Disappears always sleeps in when he's home. I should have cottoned on then.

Out they went for a couple of hours and I decided to have a little sleep. My duvet was still drying so I decided to go back to night bed then I discovered it. There was a new bed made up on Disappears side of the bedroom. It was so comfy I fell asleep in it until I heard them come back.

The noise they were making woke me up. I could hear Stay calling out to me. Just as I was stirring I could see both of them coming up the stairs to me. I met them in the hallway and Stay picked me up and took us to the bed when he sat down stroking me and rubbing my neck. Disappears joined him a little way away and I could see out of the corner of my eye he had something in his arms. It was like I suddenly came to. HE HAD SOMETHING IN HIS ARMS! 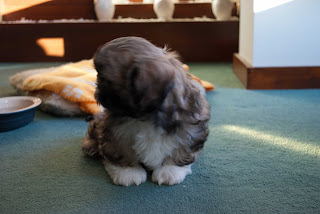 I turned to look closer and Stay started to stroke me even more rapidly. It was nice but I didn't really care at that point. The thing in Disappears arms was looking back at me.

This was it! My eyes widened. This was the day of the dog!

I didn't make much of a move and neither did the tiny dog in front of me. It was so small and weird looking. It didn't look like a cat at all but it was very similar to Tiny, Twevor and Cookie although so much smaller.

It sniffed a little bit, I could tell my catty powers were very heightened. This was no threat.

Still didn't mean I was about to start doing cartwheels of joy though.

O god here we go from today everything was going to change. It's OK to prepare yourself as much as you can but it's a different story when you are a few inches away from it and it's staring back at you. 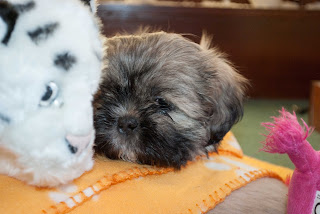 Disappears daddy had joined in with Stay daddy and they were stroking me and then the dog. They didn't even wash there hands after they stroked one of us before they stroked the other. Urgh hygiene.

The daddies moved a little closer to each other and continued their frenzied stroking. Right I thought I'm going to get a little nearer and I pushed my nose closer. The damn dog did the same thing.

It made me jump, so far all it had done was blinked at me. I did a half hiss but that was more out of surprise than anything.

I've never been this close up to a dog before. Trewvor may come here and try to lick me but I always keep a dignified distance. This was right in my face.

The daddies introduced us. This was River and I was Lil'. OK that's enough now. I'd my fill of strokes so I yawned and walked off.

Thinking about it they hadn't even given me enough proper time to wake up, talk about having a rude awakening.

I went downstairs and they all followed. Stay came out with me to the kitchen and we had a little chat as he plied me with Dreamies and Webbox. Guilt easing.

Disappears made River a little bed in the living room up by them and he promptly fell asleep. 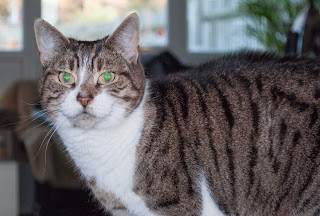 Both the daddies then came up the back with me. I even got Stay to crawl under the table to be with me. He put his head on the floor and chatted and stroked me. OK this isn't turning out to be too bad at the moment. I have them both dancing hoops, quiet amusing really. More Dreamies and then solo time with Disappears which is always a special treat.

River is still asleep she must be tired coming from wherever she has come from and I'm with Stay watching her from the sofa.

This is the day that River came. 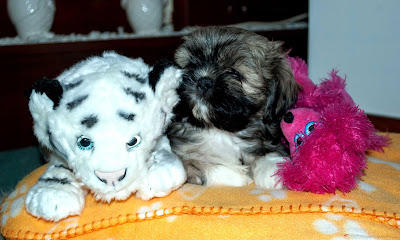