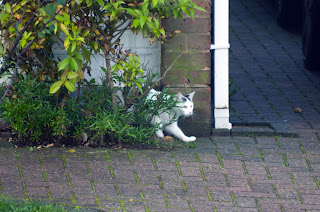 The lighter Naughty Twin has moved on from playing the fluff game and is now playing tactical attack with the Magpie.

R came out of his house and moved his car which interrupted his previous little game and he ran up the back of their house for a little while. I could see him from my position in our office running over the garage roof before disappearing into some bushes.

When he returned two of the Magpies had settled on the front lawn and were themselves having a breakfast of worms or something like that as they kept on pecking away at the ground, not noticing the approaching twin.

He tactically hid into the bushes near the front lawn, preparing for the best attack moment I'm guessing, when they were least expecting it.

Oh dear when will they learn, the birds around here are just too smart.

I guess he thought he was then being clever by deciding to run across the road looking in another direction as if he was ignoring them before doing as sharp turn to try and come up from behind.

They really are smart those Magpies and didn't fall for it and simply flew off, leaving him looking a bit foolish as he just stood their is amazement.