The Squirrel or The Fox? 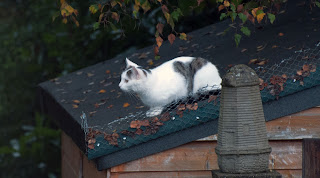 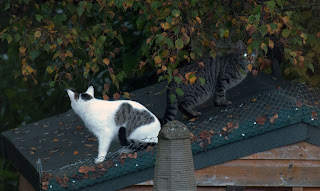 The only other possible explanation that I can think of is the squirrels as they have been known to make holes digging up their monkey nuts. They are generally very good at covering the holes up when they are burying them but are a little slack when it comes to their removal.

The thing is these holes are bigger than they usually make but I can't eliminated them yet.

I don't think I'm the only one who has discovered something is amiss this morning as Sarah and the lighter Naughty Twin are both on a mission. 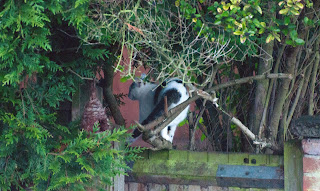 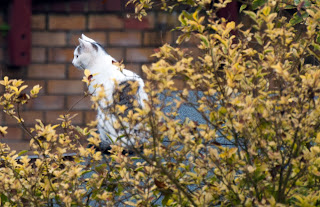 They seems to be playing tag team. The Naughty Twin I spotted on the back shed keeping a look out when Sarah appeared from the squirrel tree and ran up to him. They exchanged a couple of words before Sarah ran back home and then the Naughty Twin went where Sarah had just come from.

A few minutes later I then spotted him in the garden at the back trying to make contact with the squirrels. I'll try and catch one of them later to see what the news is.