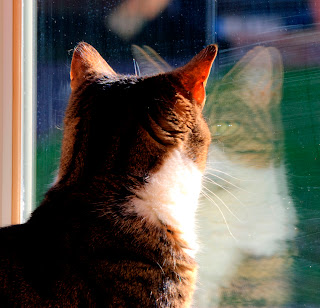 Stay daddy has finally cleaned the windows. It's been a mad week weather wise and although he does do them regularly they sometimes get very dirty outside when the weathers bad, very quickly.

The sun shining in on them shamed him into getting up, even though it's freezing outside and giving them a wash over. Not a bad job even though there's a few smears, at least I can see out clearly now.

I can now see my own reflection really clearly which is giving me lots of joy. I still find it funny when I can see myself as most of the mirrors in the house are up so high that I rarely get to have a look at myself.

I remember the first time that Charlie caught a glimpse of himself in the mirrored door of the oven when we lived in the other place. He was still just a little kitten, a few weeks old, when he ventured into the kitchen at the back of the house. He was there enjoying himself sliding on the wooden floor which was always great fun.

When I had got used to it's traction I used to use it to get a big run up and then bounce off the wall into the hallway, like a pea from a peashooter.

Anyway Charlie was just running by it and he caught his reflection in the mirrored door. Oh the surprise he had, he thought it was another little kitten that he didn't know. I suppose the first time you see yourself you've no idea it's you. He skidded to a halt and ran back, so fast that his little feet slid from underneath him, the faster he ran the more they slid all the time staying on the same spot.

There he was sniffing at his opposite reflection, turning away and then quickly looking back, shocked that the other little cat was doing the same thing. It took him a few days doing this before he realised that it was his own image staring back. I could have told him but I think it's important sometimes to discover these sort of things yourself. Oh I do miss Charlie.