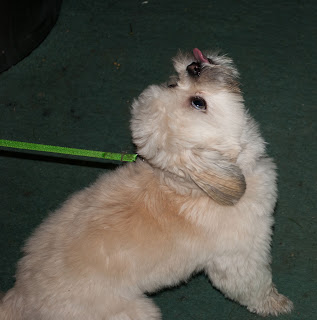 Well I wasn't wrong tonight we had bangers and cookie.

The daddies had some of their friends around. They had a fire in the garden and some of those firework things making lots of banging noises.

I ran upstairs, I knew that I would be OK there. It's not that I'm being anti social it's just that I get shy with people around even if I've seen them before.

Cookie the dog also came. I had a little look at her from the top of the stairs. He's just like Twevor although a little girl not a boy and a little smaller than Twevor. I must admit he was cute and very friendly. Sometimes I like to watch the events going on from a distance.

There was also some little people here, two boys, T and CC and two little girls E and P. They were playing with balloons and light things that you snapped and they turned all neon.

Stay daddy came up and saw me a couple of times in the evening to make sure I was OK. He'd made sure that my chair was put into our bedroom and put some extra amounts of dreamies in with me so I was OK. I've got used to all these bangs this week and I know that Stay daddy had made sure that there was nothing too big allowed to come in here tonight, I heard him saying to people. Thank you everyone.

It's all pretty quiet now, just some chatting going on. I think I'll venture down in a minute although it's so comfy here.