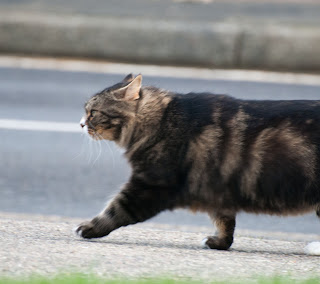 Oh dear the laughter Naughty Twin has pushed his luck once to often for Mogsie's liking.

They were playing over the other side of the road. I know this because I could see them as I watched daddy talking to C.

C asked daddy if he had seen that the fox was back. She'd spotted him on Wednesday this week and he was limping. That would probably explain why he is so angry. At least if he's got a problem with his foot then I know I'll probably be able to outrun him if need be. I'll spread the word.

Anyway there I was watching those two playing around and something must have gone wrong as all of a sudden I saw the lighter Naughty Twin make a dash for it back home. Unfortunately this wasn't the end of the matter. Mogsie just confidently and unhurriedly followed her. Oh dear I think she's in for an ear bashing.