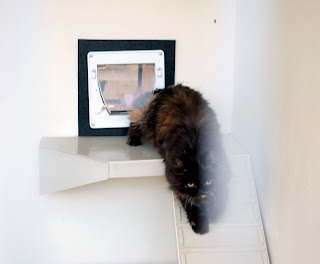 Stay daddy has just been to visit Tia who lives at the half way house.

He's brought me back a photo for me to see what she looks like. Unusual. I don't think I've ever seen a cat look like that before. Daddy says she Persian, all sounds very exotic.

He's been popping down there to see her a bit recently. He says that he'd love for her to come live with us but she can't as she has to live in a house where there are no other cats. Ha thwarted! 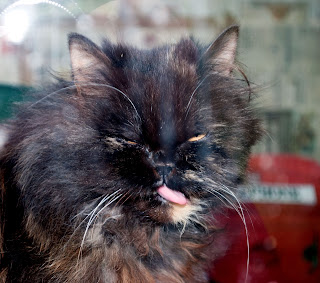 Still after looking at her picture and hearing her story I do feel sorry for her and hope she finds somewhere soon where she'll be looked after and loved.

Apparently she's a rescue cat. I wasn't sure what that means but I'm guessing by rescue that she needed saving from something. I'm keeping it strongly in mind that it might have just been that her parents got too old to look after her properly rather than she was treated badly as that would be a travesty. 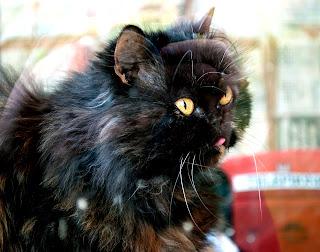 Daddy said that she is looking a lot better than when he first saw her. Her coat no longer looks all greasy and is actually now quite fluffy. He said that she came as soon as he called her and that they chatted for quite some while. Apparently she loves a right gossip and by the look of it she also like to play gurning.