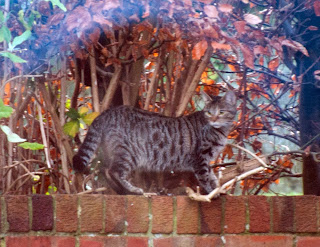 There's much excitement in Catworld this morning, news has just come in.

I was sitting here looking out the window enjoying a final break in the clouds and some sun on the road when Mogsie ran by in a big hurry.

He was quickly followed first by the lighter Naughty Twin, then Sarah and finally the darker Naughty Twin. I thought initially it was something to do with the weather turning and everyone was glad to get out and about but then I saw the Wood Pigeons also causing a great fuss and everyone was heading in the same direction to the back of Mogsie and Twizzle's. 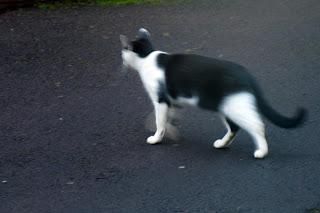 They must have had a council as they then split up into three separate groups. Mogsie stayed around the back of his home, the lighter Naughty Twin is keeping a look out under R's car and the the darker Naughty Twin and Sarah have gone to investigate a few doors down over the other side of the road.

It turns out that Foxy Lectar has been at it again and there's multiple holes been discovered over the other side of the road and the gang were all going to investigate, there's much fevered activity More news to follow as it comes in. I wonder what he's up to now?