He Called Me Sweetheart

Stay daddy was on the phone to Disappears daddy chatting away and I was just chilling out by the open front window when Mogsie walked by on patrol. 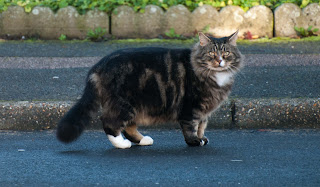 He informed me that it has been decided that he, George and the Naughty Twins are going to take it in turns to patrol the district whilst we're on high alert with Foxy. He's going to take the night shift.

The Naughty Twins are going to be acting as more of a go between when information comes in, a bit like a scout. George is going to keep an eye out on this side of the road and he is going to be keeping watch over the other side. He will though, he said, be patrolling the entire Catworld perimeter from time to time and he was just checking in with me that I was OK.

If I see anything out of the ordinary then I am to get a message to him via one of the Naughty Twins. He told me to stay alert but to keep calm and then he walked off, he turned and winked at me and asked Is that was OK sweetheart? 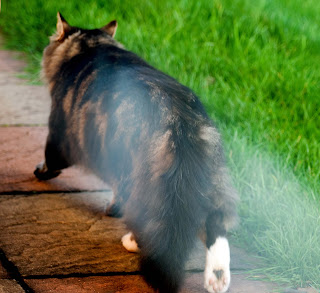 He called me sweetheart! My heart fluttered. I kept on watching him until he disappeared up the side of his house.
at 14:48