It's Here The Waterfall Of Gold

O the joy it's here, the Waterfall Of Gold has finally arrived.

Daddy has decided to work downstairs today. I think it's because of the rain as it's much more cosy downstairs and I've been sitting with him most of the morning on the arm of his chair. Nothing much has been going on in the street again I'm blaming the rain for keeping everyone inside.

Then the most wonderful thing happened. I'd kind of tuned out not really focusing on much, daddy was on the phone and his voice had put me into a trance. Bit of luck one of us was alert though as he nudged me to look out of the back window and that's when I spotted it. 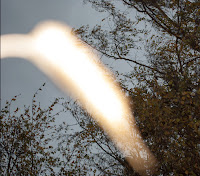 The weather although not totally perfect, a little less rain and a bit of sun would have been ideal but the wind was just right to start it. Down the golden leaves where tumbling, cascading everywhere in one big waterfall block.

I could tell daddy wanted to get out there but he was stuck on the phone, still we both managed to watch the main show happening from the warmth of inside.

When he finished his call he went outside, most of the action was over but he still had a little bathe in the remaining part of it. It's such a shame he didn't get out there ten minutes earlier but work is work I suppose as least we both got to see it.

I stayed inside watching him play as the golden leaves came down but by that time it was more of a dribble that a shower. Still I always think it's such a lucky omen and I'm so glad I'd saw it, I just wished that Disappears daddy and the other cats were here to enjoy such am amazing spectacle. 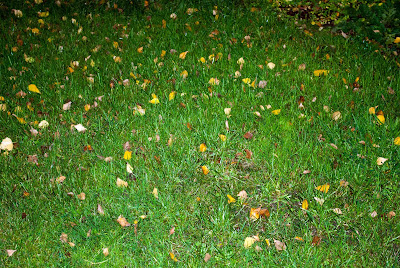