The Fly Fights Back 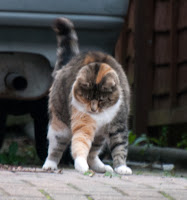 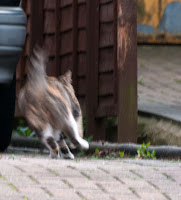 Emma's been playing the fluff game this afternoon. I've been watching her for a while and I can see that she's decided to spice things up. She's added a fly to the game.

I think she's decided to do this through boredom, no one's been out and about much for days. It can be like that around her sometimes, especially at this time of year. It gets cold and everyone seems to slow down for a bit until they get used to it.

Hey it's even been affecting me, I'm so glad that I've started an exercise routine to shake me out of it otherwise I'll be joining Nadia and go on one long sleep.

Anyway as I said she's added a fly to the game. I saw her catch it but it's been fighting back. It must have been playing possum, there she was picking and pulling at it when all of a sudden up it flew right into her face.

Boy it made her jump, she got a right startle and ran off to the post where she clawed like a demon, probably to get her adrenaline rush out. I must admit to finding the whole thing rather amusing and had a little chuckle to myself. Well on days like these you get your amusement wherever you can find it. 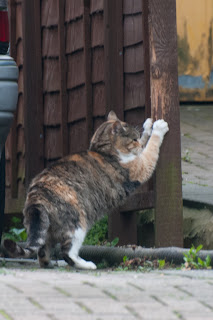