Craig The Squirrel Comes With News

I've just had a visit from Craig the Squirrel, the senior representative from Squirrel Tree.

He was accompanied by one of the black birds with two items on the agenda.

The first to pass on their thanks for the monkey nuts that daddy had put out for them this morning. Apparently very tasty and very welcomed.

The second was to let me know that Squirrel Tree had a big meeting yesterday evening about the growing situation with Foxy Lectar and his increasing vandalism and attempted attack on one of the Sparrow Sisters. She's still in a right fluster about it but luckily her sisters are taking care of her, it scared her rotten.

As expected they are very concerned. They can take care of themselves he said and were able to quickly scuttling up a tree if he came anywhere near. However they are concerned about their young ones who are still learning all the skills that are needed to evade such a surprised and unprovoked attack and who are still developing their muscles so can't run as quick.

The Land of Birds, the black bird said, were coordinating a look out system but that they can only help during the daylight hour. If it's dark we're on own own there's nothing they can do they have no choice but to sleep. They've sent word out for The Crow to come as he's got the loudest voice.

Attack one of us, attack us all, that's our motto. 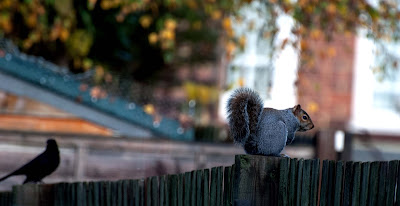