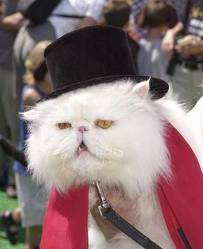 We followed the action as if right in the thick of it. A very innovative shooting style and kudos to the camera cat who got right stuck in there at the front line.

I don't know why the daddies found it so funny. I may not mix in this type of circle but there's many different districts in the whole of Catworld. You think it's just the human society that goes through stuff?

Did seem a bit one sided though. This sort of damage is always done at the editing stage.  We wasn't done any favours by the appearance of an aggressive kick boxing Russian Blue and a very bad tempered but successful business puss named Mr Tinkles. 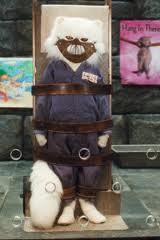 Mr Tinkles started out quite dapper but ended up a bit down on his luck. I must admit I wasn't too impressed with him either as he gave it away clearly us cats can speak human.

The daddies found him most amusing. They said that he reminds them of a cat they go visit at the half way house called Tia, who has a disturbing habit of blowing bubbles out of her nose.

Ended up as usual in such cases where things get out of hand at catastrophes door but you can only live and learn.

Chill out I say it's usually a much better solution. Which is just the advice I got from The Wiseman this afternoon about what to do about Mogsie.