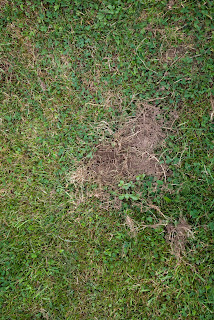 I thought it had been a bit quiet recently on the Foxy Lectar front but he's back and the evidence has just been discovered.

The daddies finally came down and stay daddy put the washing on. As he was hanging it out to dry on the spinny thing he called over to me to come and have a look.

Sometime in the night Foxy had been in our garden again and he's been digging holes. I really don't know what his big idea is but this is getting beyond a joke. The daddies aren't happy that the garden keeps on getting turned over and I'm not happy that he thinks it's OK to invade my land. The big question is though "What is he up to?"