After sleeping for all of the morning and a good part of the afternoon I woke up majorly refreshed and ready for my audience with The Wiseman.

Up I went to the Peace Garden where he resides. I had two problems that I needed to consult him on. The first to find a long term solution to the Foxy Lectar and Silver Eyes problem. The second what do I do about the situation with Mogsie?

The best way to get a really good answer from Wiseman is to be at peace and to listen to what is transferred into the mind, after my long sleep I felt in perfect condition and ready for some answers.

I sat and asked my first question. The answer came slowly at first, I concentrated really hard and it became clearer.

This was not a situation that I could handle on my own and I needed to overcome my reserve and continue to band with many. The foxes were not happy negotiators and they were here for a reason. The Wiseman told me that they also were hungry but to feed them would only encourage them and so we must keep catworld clear from temptations.

Silver Eyes was a follower and not a leader and so Foxy was the one we should really be concentrating on. When he went Silver Eyes would also go. 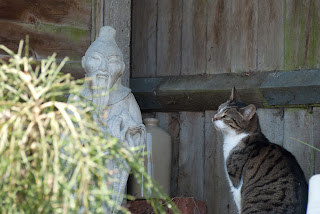 The clean up of temptation task however would involve not just us cats, but the Wood Pigeons and also the Squirrels. This indeed was a big task. The whole of our world needed to work together. Each of us should be assigned special food clear up tasks. Once that was done we could tempt them away by getting the daddies involved by leaving a trail of food leading outside of catworld and off into the fields.

How I was to co-ordinate this and get the daddies involved was something that I had to work out myself. As an added aside he said that when this was all done I could also leave mothballs at the edge of the land to deter them. Well that was a bit of a surprise answer but certainly worth a go.

The only alternative was to get professionals from outside involved or all out war, although neither option was something I was keen to pursue.

Satisfied that I had gleaned as much insight into that situation as I could I moved onto thinking about Mogsie. The answer came a lot quicker. I needed to make my position clear and them stand back to allow him to come forward. If he didn't feel that same way I needed to accept it and move on, as difficult as it was. The Wiseman always speaks the truth even if sometimes you just don't like the answers.

So I had my answers, I must now act on them.