Foxy Lectar Takes On The Wiseman 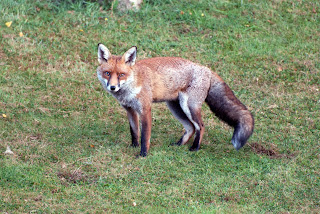 Another morning and another early morning confrontation from Foxy Lectar and Silver Eyes.

They are upping their game, not only are they growing in confidence with their daylight trips but they are now displaying signs of totally brazenness and vandalism.

As Disappears daddy bathed and Stay daddy was began to stir I decided to have a little look out the window to see if I could catch one of the Squirrels. Imagine my shock to see both Foxy and Silver Eyes in the garden.

I called out to the daddies to come look, I made such a noise that they both came running immediately. 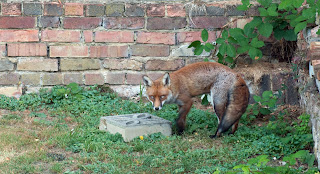 Both of them pesky foxes were sitting in the back garden. While Foxy was eyeing up his early morning breakfast, one of the black birds, Silver was happily knocking down a bit of the back wall. 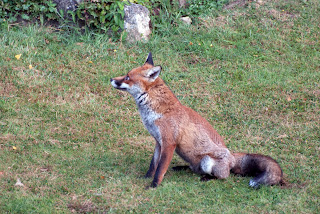 When daddy opened the window Silver ran off but Foxy just turned and smiled, taking no notice at the daddies calling out to them. The blackbird flew to safety onto AM's fence but that didn't deter Foxy who tried some sort of Jedi mind trick on him to hypnotise his gaze and they just sat there staring at each other.

Daddy called out and it seems to break the trance and the black bird flew of. Foxy didn't look too impressed and tried to hypnotise the daddies by staring back straight into their eyes. I looked away as someone here needed to ensure that they were not under their control, although I had no idea what I could do if he gained power over the daddies, all by myself.

Foxy slowly turned and walked over to The Wiseman, who just stared ahead, as always, as ever. Foxy then did the unimaginable and knocked into him, a sure sign of disrespect, before jumping onto the back wall and slowly swishing his tale took his time walking along my lands boundary. 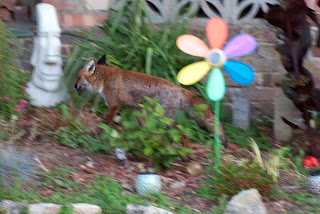 When he reached the shed he turned, took one final look and then leaped, like a horse over a jumping pole into one of the other gardens.

When the daddies went out I ran up to The Wiseman, he was OK, no signs of any reaction. I could see the black bird was high up in the tree, apparently unaffected by the confrontation. Still no signs of any of the other cats, Squirrels or Wood Pigeons. I shall report this back to the Naughty Twins later and get them to spread the word. 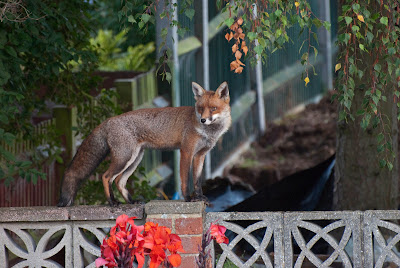