I've only just realised, I've not see Nadia around for days.

She usually disappears for about half the year and goes to sleep around October. Last time she was a bit naughty and did it outside. All through the Winter and into early Spring the daddies would watch out for her everyday in the garden to see if there was any signs of movement.

Not until about April did she appear one afternoon. Daddy was very excited and went and told C that he had found her. I don't think she was worried but she did appear pleased to hear that she was back. Stay daddy certainly was and vowed not to let the same thing happen twice, so it surprises me that he hasn't seemed too concerned that she's not been wandering around lately.

As the daddies are still not properly up, although I did manage to wake them so I know some stirring is about to happen, I thought I would have a little scout around to see if I could find her until they come down. I looked in all her usual places, behind the fridge, under the settee and in the hallway in the corner but no. She's found a new place to hide and I've discovered it. Under the beanbag. It's still too early for her to go to sleep I guess she must be doing a trial run and preparing for her big hibernation. 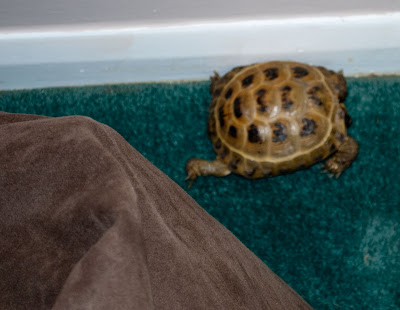