The First To Make A Move 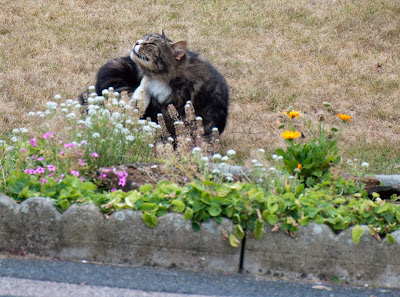 Mogsie is looking mighty fine over there on the grass just having himself a little scratch and tidy up.

Even though he's a boy, flowers make him look pretty, I don't think I'll manage to persuade him to wear them in his hair though, I'm not a magician or anything and he's way too macho for that.

I just don't know what to do to get him to notice me. The last attempt was a total failure and I ended up walking away feeling a right idiot determined not to make any more moves. However it's as daddy says though, if you want something you've got to put it on the line and I can understand after my own little fright that going up behind someone in the dark is not the best way forward.

I'll have another little think about it before progressing further. Watching him still makes my heart leap a little so I know I can't let this go. It's just like most of the time he doesn't notice me or forgot that I exist.

Come on, I want to scream at Mogsie in frustration, and take a chance on the unknown
at 18:20