What on earth has happened to the darker Naughty Twin?

I've just been relaxing in the bedroom having a little look out the window. Surprising, now that daddy is leaving the office door open I have less inclination to go in there as soon as he starts work in the morning. Guess it's the slightly forbidden temptation that proves so alluring.

Anyway today is also the first time in days that I've been able to look out the window and not see a sea of white fog. It's been so thick that even the birds have been quiet, or so I thought. Now I know why the real reasons they've been scarce today.

I first of all spotted both the Naughty Twins on sitting on C's garage roof, The lighter one turned and looked at the darker one and then jumped right off the roof onto the path. No part way jump onto the wall and down, no straight down he went.

The darker Naughty Twin turned in the opposite direction away from me and walked off. He then popped his head up, staring right at me. He has eyes of neon green! What sort of hideous experiment has taken place on him? I'm beginning to get concerned. Foxy Lectars mate had silver eyes and now a Naughty Twin has eyes of neon green. It's almost like some bizarre Zombie film around here.

I quickly ran into our office to the safety of daddies lap. Where I spotted the lighter one hiding under R's car. I don't blame him. 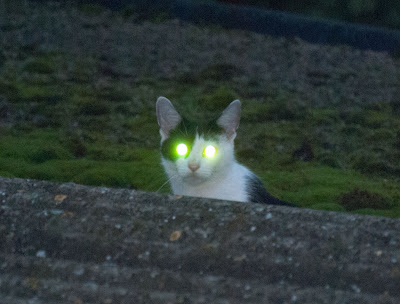