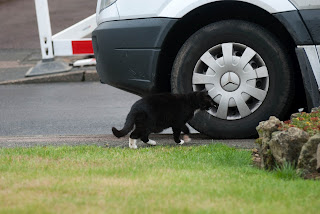 Daddy has had some strange man in the house this morning, doing some sort of work. I've no real idea what he was doing, I had no interest in him.

What I did have interest in was the curiosity that his van seemed to be creating amongst the rest of the district.

First of all George came around from the side of C's house, a little cautiously he approached it from the side, sniffing the wheel and then settling himself underneath. Two minutes later he was followed by the darker Naughty Twin who decided to take more of a head's on approach. Again he stopped to sniff the wheel before joining George under the van. 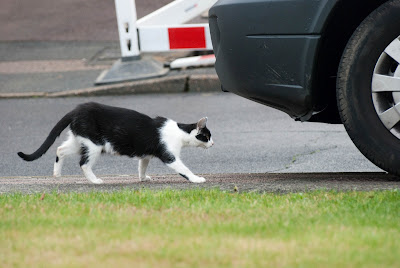 Within minutes the lighter Naughty Twin also came around the side of C's house and ran up to the front, no wheel sniffing for him, straight under he went to go. He didn't look, he didn't see who was underneath. 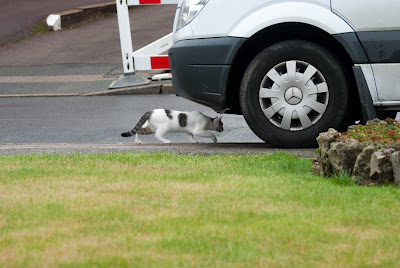 From my understanding this is the first time that both the twins have been in the same place at the same time this week. Some words were exchanged, the lighter Naughty Twins back arched up. Just at that moment the man came out of the front door and all three ran off. 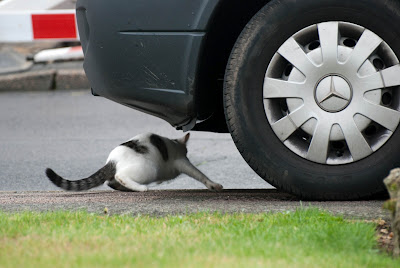 I don't know what would have happened if he hadn't but I from what I witnessed it would have either escalated into a ball of cats fighting or a continuing tense stand-off until one of them backed down and backed away.

In either case it's broken that impasse between the twins. If they've kept their argument going all week no wonder Emma has been trying to get some time on her own, she must be exasperated by it all.
at 09:59