Well I relented last night. I went in to say goodnight to the daddies and then retired to my chair in the office to get another good nights sleep.

I could hear them calling out to me to come back in. I sat there and thought about it for a while, where would I get the best nights sleep? I could hear Stay daddy saying he missed me sleeping on his feet. It felt like something was missing he said.

That was when I relented. I was missing it too and crawled back in there slowly and settled down not to disturb them. It was the right decision. No wiggly feet throughout the night or trips to the bathroom and the joy in their voices in the morning when they woke up and saw me there was worth any potential sleep loss that I might have had.

It was very light outside and I though at first that they had got up late but they didn't seem to be in an extra hurry. I could hear them talking about how nice it was to wake up and not stumble around in the dark. They said something about time changing but I had no idea what they were talking about but it seemed to be making us all happy.

I could even see Mogsie was wide alert this morning as he did his early morning stretch and exercises. 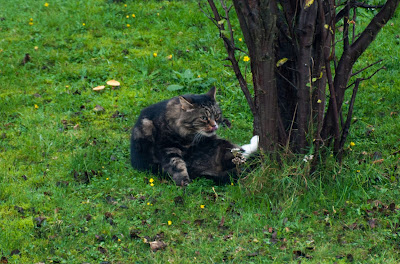