Now Me Makes Eyes At Me 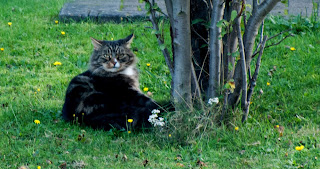 Typical, just as I had started to question my feelings for Mogsie because of the age difference he starts to eye me up from across the road. Still at least someone else has finally surfaced.

Come to think of it I've not seen him around for a few days, maybe he's been on his holidays? I certain hope he's not been unwell and stayed indoors because of that. I didn't like it when he had to go to the doctors to get the chicken bone removed from his throat.

If he does have an interest in me he needs to get a move on as I have an admirer apparently. Daddy had some man come and sort out the letter box today and as he was looking at what he had done C called over a message, Milly sends his love, unusual name for a boy cat! Still I called my son Charlie and that can be both a boy and girls name.

Anyhow wherever Mogsie's been maybe it's a case of that old adage about absence making the heart grow fonder.The age shouldn't bother me the daddies are a different age and it doesn't seem to matter to them, I guess I should just stop fretting about it and go with the flow. He does look mighty fine.