George Has Two Things To Say 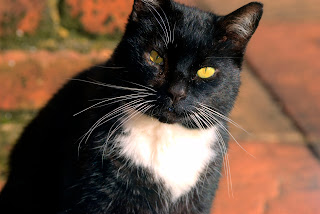 Ah how nice George has just popped by for a quick word. He said wanted to say thank you for two things.

The first was for my concern about his eye problem. He said it was much better and showed me. It was still a little wet but not as weepy as it had been. He said he'd tried the eye patch I'd left out but that it didn't suit him and in the end it just became irritating to his nose where the elastic slipped down.

The second was to reassure me that they were trying their best with the lighter Naughty Twin to get the message across about the dangers of just running out in the road. Emma had told him that I'd had a word with her and he was pleased that someone else was keeping an eye out. I laughed at the irony of the comment but think I covered it well.

He was only here a couple of minutes What can you do, he said, teenagers they think they know it all just can't be told and off he went with a shrug of his shoulders.