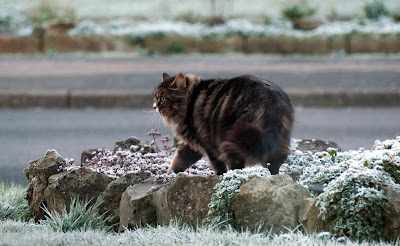 It's very early for Mogsie to be out and about but he said it's the cold outside that's woken him up.

He said he also wanted to check in with me before too many people were around. He's heard on the cat information network what has been going on with Spit and he wanted to let me know that he's also keeping a very close eye on the situation.

He said he thought that a Cat Council meeting would draw attention to the situation and he's of the same opinion as me that it's best to see how it goes and not reveal too much.

There's some cats around here that are very much of the opinion that he's genuine in his desire to leave his gang. There's other like us two who are a little more suspicious. It's best to play the situation carefully and not draw too much attention.

Let's monitor the situation before making our next move he said.