Bastet The Eye Of Ra

Stay daddy has just sat down and decided to give me a bit of a history lesson. Todays topic is on Bastet the cat goddess of Eqypt.

As soon as he said cat goddess he had my attention. He said he got an email or something from the British Museum, his old home, promoting cats in history hence his sudden interest. 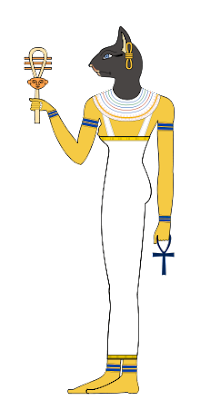 Bastet he said was depicted as a lady with the head of a cat. I knew in Egypt that cats were loved and worshipped but I didn't realise that many of them wore jewels and gold and things. Wow I bet that would have weighed them down. From what daddy told me though they didn't have to do much save catch the odd rat, liking what I'm hearing.

Daddy said that when people passed their cats were often mummified and they've found over 300,000 of them. They must have been really loved and their owners must have really wanted them to be with them in the afterlife.

He said that cats were revered back then like cows are in Indian now and that she was also known as the Eye or Ra, the Sun God . Wow

Daddy showed me a picture and then it hit me. Daddy has a little statue of Bastet upstairs that nanny gave him. I never realised who it was what a coincidence.

I'm liking the sound of this Bastet character, shame things aren't a little more like that now as they were back then. Wow us cats have a cat goddess!