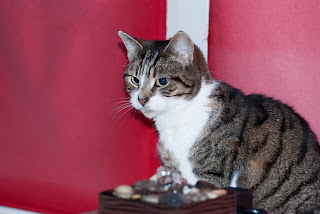 I've been downstairs with the daddies while they are trying to train River not to jump up at me and to go to them and sit in front of them when they click their fingers.

She's not doing too bad although at times I wanted to shout at her get out of my way. To keep out of her way I've been sitting on the window ledge spending my time flipping between watching the TV and watching the entertainment outside.

On the TV they are watching something where people keep on getting kicked out of some house. The daddies like this show they watch it all the time and often can be found at various times throughout the year shouting get them out.

Outside Mogsie and Sarah seems to be playing tag.

If only they'd paid a little more attention to what was going on around them they would have seen Foxy slip through and go through a fence on the other side of the road towards someone's back door. Get out of that house!