I'm Not Going To Be Intimidated 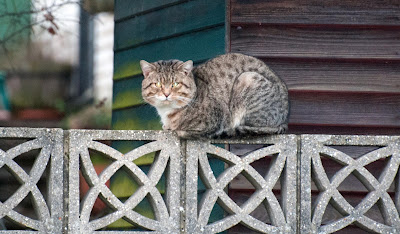 I really don't know who Chameleon thinks he is. He's been sitting on our back wall just staring in at us.

Well I'm not going to be intimidated by him!

Daddy says it's always important to stand up to bullies. You don't have to be getting all violent with them, scraping and fighting. It's just important to let them know that you're not bothered by them. He says ignoring them or their behaviour is a good place to start. They often try to bully because they are insecure in some way themselves and in many respects should be pitied.

I decided just to stare right back at him, we had a right bog out.