A Terrible Mistake, An Attack Was Happening 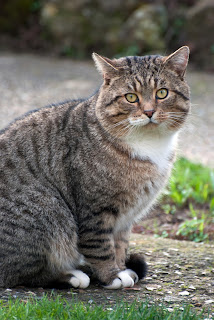 Oh no what a terrible mistake I've just made. The cat at the back who I've just been admiring wasn't Emma, it's another member of The New Cat Crew.

I was just up the front looking out of the newly cleaned front windows when I saw the lighter Naughty Twin running by.

I thought she was playing chase with Mogsie until they stopped on our pathway.

The lighter Naughty Twin quickly ran down the side of the house and something told me that she wasn't enjoying this game. As I looked closer I could have kicked myself.

The cat that I had confused as Mogsie I had only minutes before thought was Emma and this wasn't play. It was an attack! 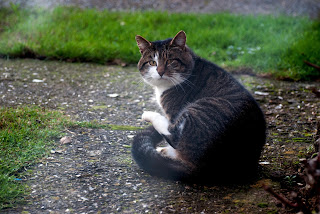 Spit quickly ran in front of our front window and between them they were trying to corner the lighter Naughty Twin. I wanted to get out but I couldn't, the windows were shut. Spit saw me, turned and gave a really evil stare and Chameleon joined her..

I quickly looked around to see if there was anyone that I could call to her aid but the street was empty.

it was at that point that the lighter Naughty Twin ran quickly up AM's pathway and Spit and Chameleon chased her across the road. 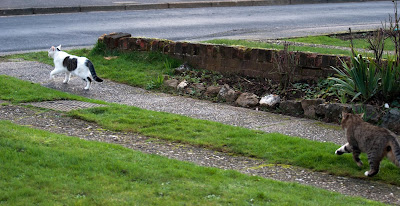 She was heading in the right direction straight towards Mogsie and Twizzles. I do hope they are at home. Mogsie will not be happy about his little protege being attacked.