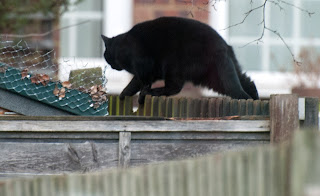 Doublays been out the back and the actions, well suspicious to say the least.

I first spotted him lurking on C's back fence. I didn't make me presence felt I wanted to see what he was doing.

He then jumped down into her garden and within literally 5 seconds jumped back up and over the shed into the garden at the back of C's house.

Again just seconds later he was back up on the sheds and walked all along our back wall before passing through into Squirrel Tree territory.

Now us cats are known for wandering around and noticing the smallest things but this was different. This felt to me like he was investigating the area, looking at escape routes and secret passage ways.

I'm keeping a double close eye on that one as I said before I think he's the scout of the group and that's what a scout does, get the lay of the land before any further action takes place. I'm not very much on my guard.