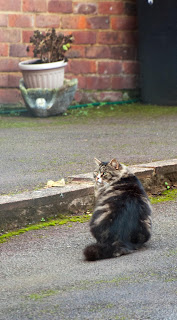 I've been musing over my plan to move things on with Mogsie over night.

Daddy says it's always best to be upfront about these sort of things. It's important he says to not play games, if you like someone you should just tell them.

On paper that's nice and simple but us cats are the same as people, scared of rejection even if we are very resilient. As soon as emotions are involved daddy says, logic very often goes out of the window.

So therefore I've been using my head and I've been weighing up the evidence and asking myself have I mis-read the signs?

I know he can be very friendly and protective of us, after all he's the protector of all of Catworld. Well he's certainly shown me the same consideration and care he does with everyone.

Have there been any more obvious signs that he actually is interested in me?

Well although he's not over hear all the time when he does come around I've had winks from him and he's called me some cute names. Flirting I believe it's called.

Well if someone is flirting with you there's either some sort of interest or they are just being cruel and leading you on. Well Mogsie is certainly not a cruel cat. So I'm deducing that there's some interest there.

Daddy says that it's not always up to the male to be the one to let the other know if they are interested although a lot of men do take the reigns. Well he hasn't been too overt but then again I guess maybe my shyness has held me back from reciprocating so he's probably as unsure about my feelings as I am his.

The first step of my love plan. Let him know I like him and see where that takes us. Yes that feels like a good place to start.