George Is Not Too Well 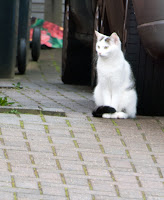 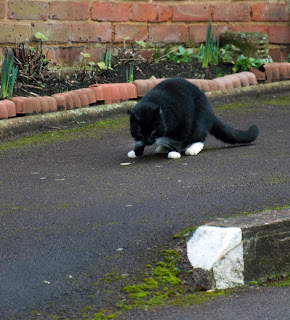 I was just sitting here with daddies watching some old black and white Bette Davis film on TV, I Don't Miiiiinnnnd I think it was called cause she said it a lot, when I spotted him walking across the gardens over the road. He seemed OK until he got to E's pathway.

There he stopped and was a little bit sick right in the middle, right in front of everyone. He couldn't have been feeling too good at all as he just walked away leaving it there and us cats are known for our clean ways.

He then walked slowly across the road back to his. The lighter Naughty Twin who had been sitting by R's car watched the whole scene and went running across to see him.

About a minute later he came half way back over and called out to Mogsie to come. Dutiful as ever he sauntered over to see if he was OK. No one has come back yet but I'm going to sit here and wait for news.