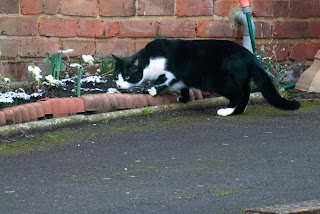 I don't know why she's not going inside to get away from him. Following on from the events of earlier this morning I saw her running over to E's and then going through the back into Tiny's garden.

She kept on looking behind her and shortly afterwards I saw Spit following her. Bella had given him the slip as he sat on Tiny's porch way just staring and throwing out dirty looks. He looked very angry I guess because she had evaded him. 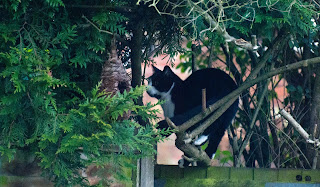 I fell asleep and a little while later then spotted Bella out the back by the Peace Garden. There behind her was Spit creeping up. Bella managed to escape his clutches by jumping through Squirrel Tree.

There was nothing I could do River was outside playing and I knew I couldn't make it past her. She's been very frisky this morning with all the random snowfalls.

I went to the front to see if I could see Mogsie or George about. Neither were although I saw Emma sheltering herself under R's car and asked her where Mogsie was.

She told me he'd gone to find their base camp. I know he can look after his self but I do hope George went as backup.