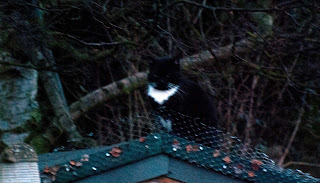 I was downstairs with daddy watching some programme about the Northern Lights when I heard a noise outside and went to investigate.

It was George calling out from the back shed. I know us cats can see pretty well in the dark but I still had to squint my eyes to see him properly hiding himself in the tree shadows.

He said that he had called by to apologise about his earlier behaviour. I told him not to worry we've all done it, reacted in the moment.

Apparently after the meeting when everyone dashed off there was all merry hell to pay. Sarah had scolding him badly, although the Naughty Twins were still laughing about it an hour later. 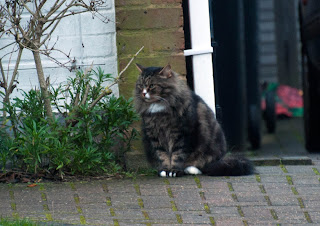 Mogsie had been giving him glares from across the road. Yes I had spotted that but thought it best to keep a low profile myself.

George said that upon reflection it probably wasn't the best way to deal with the situation.

I must admit I really appreciated him coming over to make amends but I guess at the end of the day he was only defending us all.

With that he was off and I'm no nearer knowing what we are all going to do about the New Crew.