The Cat Council Descended Into Chaos

The Cat Council descended into chaos.

It started out OK. Bella sent her apologies via the twins for not attending. She hardly ever comes out these days and the twins would pass on any information to her.

No one knew where Emma was, she hadn't been seen all morning. Mogsie wasn't too pleased you could tell. I don't think her absence is helping the tension that is already there between Twizzle, Mogsie and her. Still that's something that they've all got to work out.

There was two main items on the agenda.

No more reported sightings from anyone over the past couple of days and no more holes appearing. Everyone was in agreement that this needed to be watched but as there was no immediate threat we would all monitor the situation and if needed we could meet again to discuss further.

We quickly moved on to the second - The New Cat Crew.

I started out by explaining to everyone what had happened yesterday with Flash and River and gave a brief description of the three newcomers.

Mogsie said that he's heard a rumour that some new cats have moved into the district.

The lighter Naughty twin said that she had also seen Doublay and Spit when on her Foxy patrol but that they had left him alone. She thought that they lived a couple of roads away and didn't know what they were doing over here.

George said he was well up for a fight but I could see this wasn't Mogsie preferred method of dealing with them.

The darker Naughty Twin asked if Doublay or Spit had done anything to warrant such action. I said they hadn't to me, just been hanging around a fair bit. It was really Flash that had tried to cause some real trouble.

Sarah who had been quiet up to this point asked if we should really be getting involved as so far it had been River that he'd tried to intimidate.

Mogsie said that as River was now accepted as an honorary member of Catworld that she must be treated as if she were a cat and to strike out at one was to strike out as us all.

Sarah thought for a while and nodded in agreement. She asked me in a low voice how things were going living with River. I said OK, better than expected but it was at this point the meeting went belly up.

I spotted Spit watching us from the shed roof, eavesdropping. 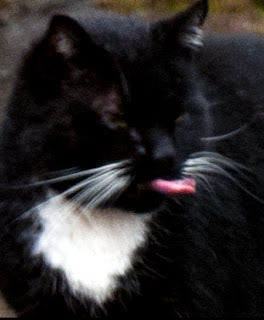 Spit spat back that he could do whatever he liked.

Sarah tried to breaker peace by asking what they wanted and they were welcome to Catworld but it must be in peace.

Mogsie interrupted asking why Flash had had a go at River and George stuck his tongue out.

The Naughty Twins started laughing & Spit stood up. What his next movement was to be I've no idea as we were all interrupted by daddy and River coming back in the back gate. With that we all fled.

The tension between Mogsie and George at the end was palpable though. I'm not sure that things have not been made worse. 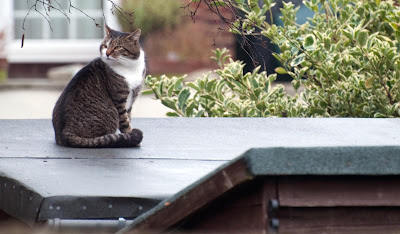