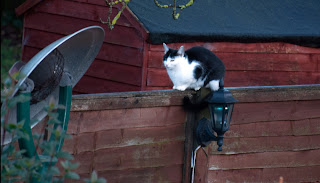 Hardly any sightings with the rest of Catworld for a week, New Years Day arrives and everyone is coming out thick and fast.

The day started out with a sighting of the darker Naughty Twin.  He was just enjoying this mornings fabulous weather alone. By the look of him I think he may have had a heavy night. You can always tell when someone just wants to be left alone. I nodded from the bedroom window but I'm not sure if he was in a fit state to see me. Still it's nice to see him about again. 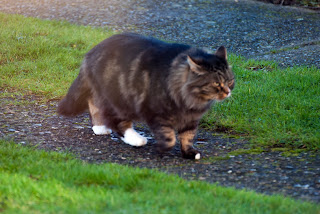 I came down with Stay and Mogsie popped by to say hello. He didn't stay long but he was looking in fine form. Daddies saw M as they went out a little earlier and she told them that he'd only been going out for about half an hour a day. He'd used this break to catch up on so rest and he hardly left his bed. He's OK though which is more than can be said for poor Twizzle.

She had to go to the Doctors over the holiday. Her eye was playing up and they were really worried so rushed her to hospital. Turns out she had a bit of glitter or something in it which irritated it. A nice lot of antibiotics later and she's on the path to recovery, thankfully. 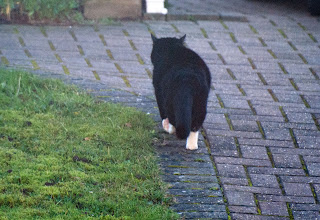 M also told the daddies that Emma has been camped out in their hallway. Turned it into a right snazzy pad apparently. Now I didn't know but even though she's moved herself in Twizzle and Mogsie don't get on with her which I think is the reason she's taken over that part of the house. I don't blame her for wanting to live there but for a house of harmony she must try harder.

George walked by but hardly turned a hair. Maybe he was at the same party of the darker Naughty Twin and they are both suffering. He did look particularly grumpy today. As least he can give Twizzle some tips with the old eye problem. He's certainly found a way to live with it. 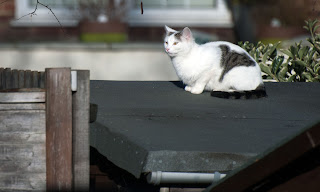 I watched daddy take down the tree and move Alo to her new place in the window and with all that activity I decided to have a little sleep. When I woke the lighter Naughty Twin was on the shed at the back looking in at us. She looked in better fettle than George so I take it she abstained.


Things are certainly getting back to normal.
at 15:56